How to Travel with Marijuana and Avoid Trouble

Traveling with marijuana can present a serious legal issue, especially if you plan to take it with you on a plane or drive across state lines. Even though 11 states have legalized recreational use and 33 have legalized medical cannabis programs, current federal laws make it illegal to cross state lines with weed.

Whether you want to bring your edibles on vacation or simply keep your medication on hand as you travel home for the holidays, you need to be mindful of how you transport your herb. With a few basic precautions, you can avoid some of the common problems travelers face when traveling with weed.

How to Legally Travel With Cannabis

If you’re legally permitted to possess and use cannabis, whether recreational or medicinal, there are guidelines that allow you to transport your product from place to place. For example, Nevada law allows users to drive with up to one ounce of marijuana in their vehicle so long as the product is stored in a sealed container and kept away from the driver and any passengers under 21 years of age. Other cannabis-friendly states have similar guidelines on the books.

Even if there are no legal concerns, it’s best to travel with an airtight, smell-proof container. Not only will this keep your cannabis fresher, but it will help to keep you above suspicion. Driving under the influence of THC is illegal, and the smell of cannabis may give police probable cause to search your vehicle—even if the marijuana is in a sealed container. Even if you can prove your innocence, you still don’t want cops poking around your vehicle and looking for signs of wrongdoing.

Traveling Across State Lines With Cannabis

When you’re traveling long-distance with your cannabis, the laws are a bit more complex. Federal law strictly prohibits the transport of controlled substances (e.g. marijuana) across state lines. This creates a lot of anxiety among would-be travelers, but it’s a bit of a moot point when you consider that all marijuana possession is prohibited under federal law anyway. Your odds of running into trouble simply depend on your destination.

If you drive from one cannabis-friendly location to another (such as from California to Nevada), it’s unlikely that you’ll face any legal consequences as long as you take the time to research and abide by the laws in each state. An officer in a cannabis-friendly region is unlikely to interrogate you about where you purchased your product if it’s properly sealed and in a legal quantity. Keep your medical card or recommendation on hand if applicable.

When traveling from a recreational-use state to a less-cannabis-friendly state (such as from Nevada to Utah), you have to be much more cautious. If the destination state has a zero-tolerance policy or imposes fines or jail time for possession, you need to be very careful about transporting your product.

You may be in luck, though, if you’re certified to use marijuana for medical use. Some states are willing to overlook where you acquired your product as long as you have your certification on hand.

For example, Utah recently implemented a medical marijuana program but hasn’t made cannabis available for sale yet. In the meantime, patients can still receive their certification and use cannabis legally.

The Utah Medical Cannabis Act includes a provision that protects cannabis users who have received a doctor’s recommendation but haven’t yet been issued a medical marijuana card. Since cannabis isn’t yet available in the state, these protected users will need to get their medication either on the black market or out of state. Many are turning to the legal dispensaries in neighboring Nevada and Colorado.

What If You’re Stopped by Federal Law Enforcement?

As previously noted, cannabis is illegal at the federal level. So even if your region is cannabis-friendly, you can theoretically be taken into custody if stopped by federal law enforcement agencies. Thankfully, the odds of this actually happening are low.

Federal agents aren’t concerned with routine traffic stops. If you’re apprehended by them, you probably have much bigger problems on your hands. Federal officials may target people suspected of running large-scale operations or trafficking drugs, but they’re not generally concerned with searching the vehicles of citizens who drive over the speed limit. If you’re curious about the penalties you might face if caught, your best bet is to brush up on the state—rather than the federal—laws.

At the federal level, cannabis possession is a misdemeanor punishable by a $1,000 fine and a maximum of one year in jail (for a first offense). Many states, like Ohio, follow a similar model, but the laws can vary tremendously from one state to the next.

Places like New York will subject you to no more than a small fine for possession (similar to a traffic citation), while places like Oklahoma will impose up to one year in jail and a $10,000 fine for a first offense — even if you only have trace amounts of the drug. By understanding the penalties in your state, you can make an informed decision as to whether traveling with marijuana is worth the potential risk.

Assuming you don’t have a medical marijuana card and don’t live in a recreational state, you’ll have to use some discretion when traveling with cannabis.

The first thing to remember is that—under the Fourth Amendment—police can’t search your vehicle without either a warrant or probable cause. Probable cause is any identifying factor signaling that a search would likely result in evidence of a crime. So if a police officer finds marijuana, marijuana paraphernalia, or a strong odor of marijuana, they may be able to search your vehicle.

With this in mind, the first golden rule is to not create a probable-cause situation. All cannabis products should be out of sight, preferably stored in a trunk and sealed in an airtight container. Don’t drive while under the influence, as police are trained to look for such signs, and that in itself may warrant probable cause.

In short, keep your product out of sight and out of mind. Don’t arouse suspicion for other reasons, and your stored cargo should never become an issue.

Bringing Weed on a Plane

When you decide to bring cannabis on a plane, know that you do so at your own risk. The good news is that as long as you use basic discretion and keep your stash small, you should sail right through airport security. The TSA has explicitly stated that they “do not search for marijuana or other illegal drugs,” but they will usually report it if they find it out in the open. That goes for medicinal as well as recreational cannabis.

First, invest in a good odor-proof cannabis storage bag—these are widely available online. Avoid using your airtight weed container, as it may warrant closer inspection with some agents. Just place your odor-proof bag in your carry-on (not in your checked baggage), and pack your product discreetly. Obviously, you don’t want a baggy full of Skywalker OG and a collection of pipes hanging open in your bag.

If you’re bringing joints, consider slipping them into a pack of cigarettes—between actual cigarettes. If flying with edibles, consider placing them in the packaging of commercial snack foods. For example, there’s nothing stopping you from placing cannabis cookies in a Chips Ahoy package or slipping your special gummy bears into a Haribo gummy bear bag. But whether you’re traveling with joints, edibles, or any other cannabis product, just remember to keep it concealed in an odor-proof bag.

Just avoid packing excess liquid (like cannabis-infused energy drinks), as that may warrant closer inspection. If you plan to bring vape juice, keep it to no more than 3.4 oz. or 100 ml. per TSA guidelines.

Remember, TSA is not looking for cannabis. Their focus is on national security so don’t give them a reason to examine your luggage. Generally, we recommend you to leave your stash at home and resupply once you arrive at your destination.

As long as you use common sense, you should have little to worry about—when traveling domestically, that is. If you are thinking of how to sneak your weed across international waters and into another country, you’re on much shakier ground.

Our best recommendation is: just don’t do it. You can never predict what will happen during a routine customs inspection, and you don’t want to be apprehended outside your home country. When traveling to a cannabis-friendly country like the Netherlands, it’s better to just purchase a fresh supply when you arrive. If you’re traveling to a non-cannabis-friendly country, the consequences of possession can vary dramatically.

If you absolutely must bring your stash with you internationally, at least take some time to research the laws and potential consequences in your destination country. Then decide if the risk is worth the reward.

Can You Travel With CBD?

Cannabidiol (CBD) is becoming increasingly popular due to its host of possible health benefits, which range from anxiety relief to eczema prevention. CBD is derived from the cannabis plant, but it’s not always subject to the same travel restrictions. CBD containing less than 0.3% THC is regulated as industrial hemp and permitted for use by the federal government. You can legally fly with it under TSA guidelines, and you can even drive with it openly without violating federal law.

However, although the federal government has taken a more progressive stance with CBD oil, a few states still have tougher laws on the books. For example, Idaho law prohibits the use of products that contain any THC whatsoever. So a hemp-derived CBD product with 0.3% THC might be legal in Montana but illegal in neighboring Idaho.

Make sure to know the laws where you live, and travel discreetly if necessary. Since CBD is becoming more available, it’s best to leave it at home and pick up a small dose after you arrive at your destination.

What to Do if You Get Caught Traveling With Weed

Some states, like California, won’t look twice at your marijuana if it’s transported in a legal way. Other places, like Arizona, will treat even an ounce of marijuana possession as a felony punishable by jail time.

If, despite your best efforts, you get caught traveling with marijuana, don’t panic. If you’re polite, cooperative, and honest (no cop has ever bought the “these are not my pants” defense), you’ll probably walk away unscathed. Even Arizona (which is technically a zero-tolerance state) won’t incarcerate you for a first or second offense.

In most cases, you will likely get off with a warning or a fine. Even a TSA agent will often just confiscate your stash and send you on your way. As societal norms change, law enforcement is less concerned about throwing the book at people who just want to get high. So just be cooperative and say as little as possible to avoid incriminating yourself. You are going to be okay.

Of course, prevention is the best cure. So when you decide to leave home with your marijuana at your side, be sure to heed the tips in this article and avoid detection by anyone looking to harsh your buzz. 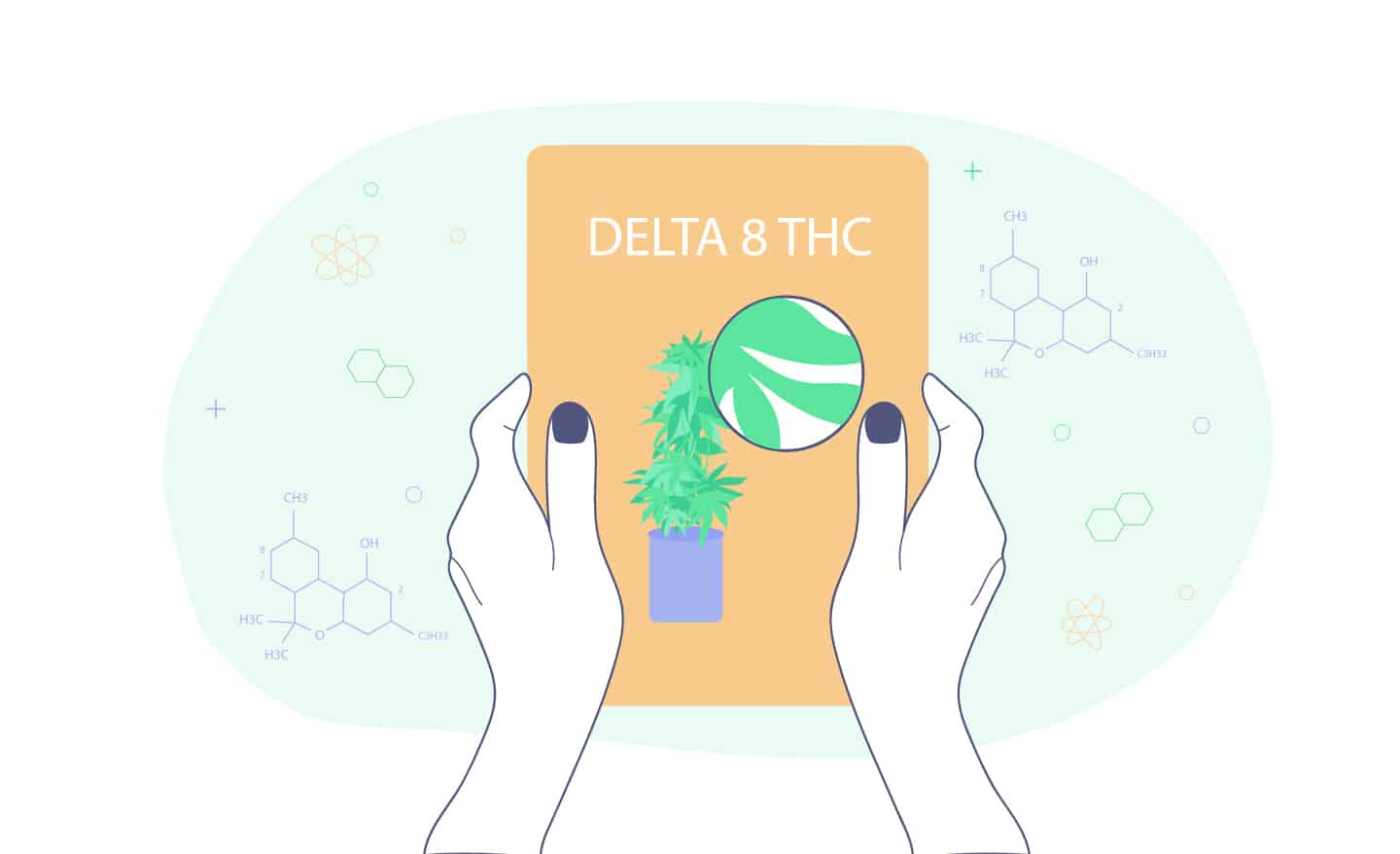 The Ultimate Guide to Delta-8-THC

Click here to learn what is delta-8-tetrahydrocannabinol (Delta-8-THC) and why cultivators are rushing to isolate it. 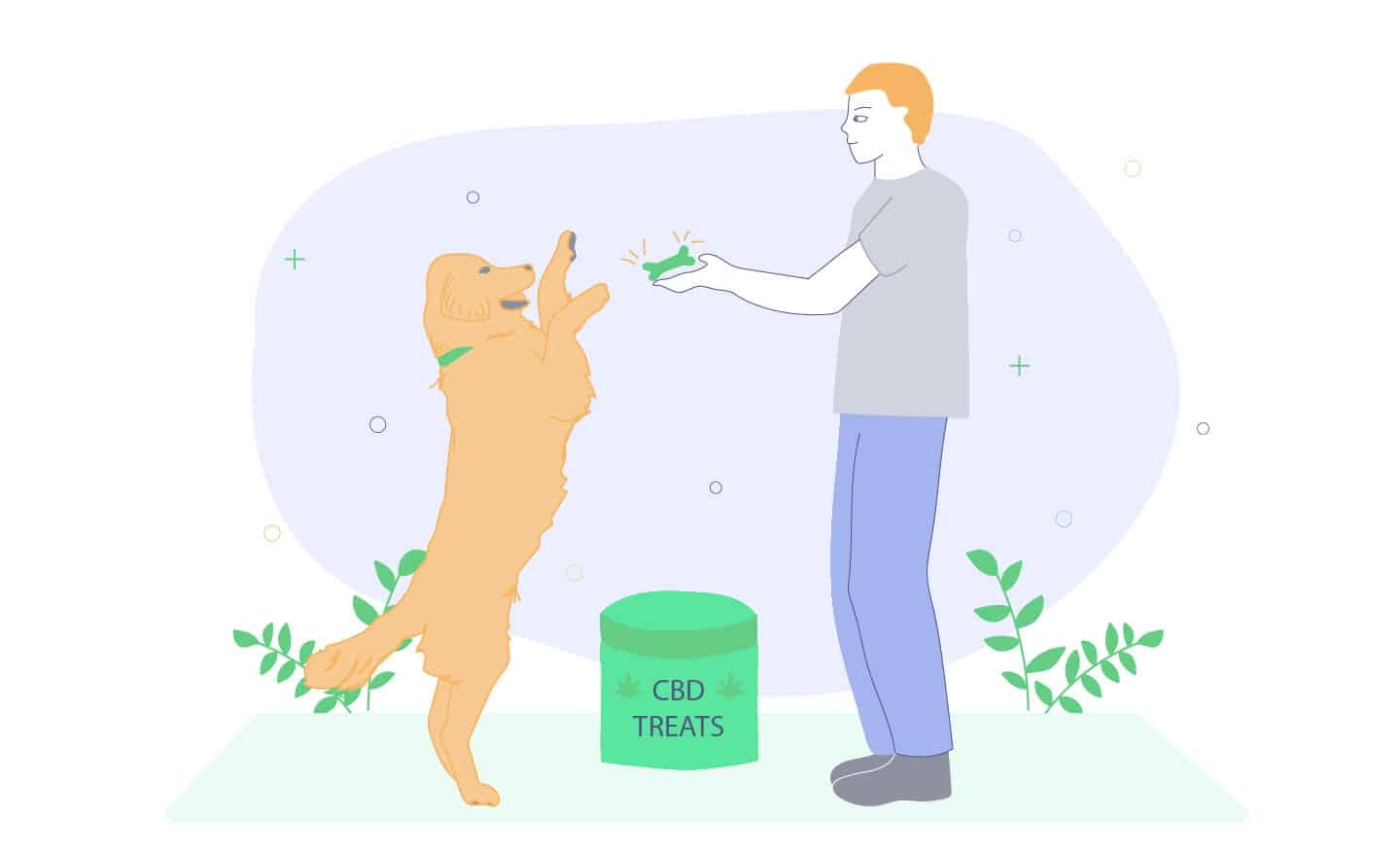 Can CBD help dogs to overcome joint pain? Learn what the science says, and see pet CBD product recommendations from the most trusted manufacturers. 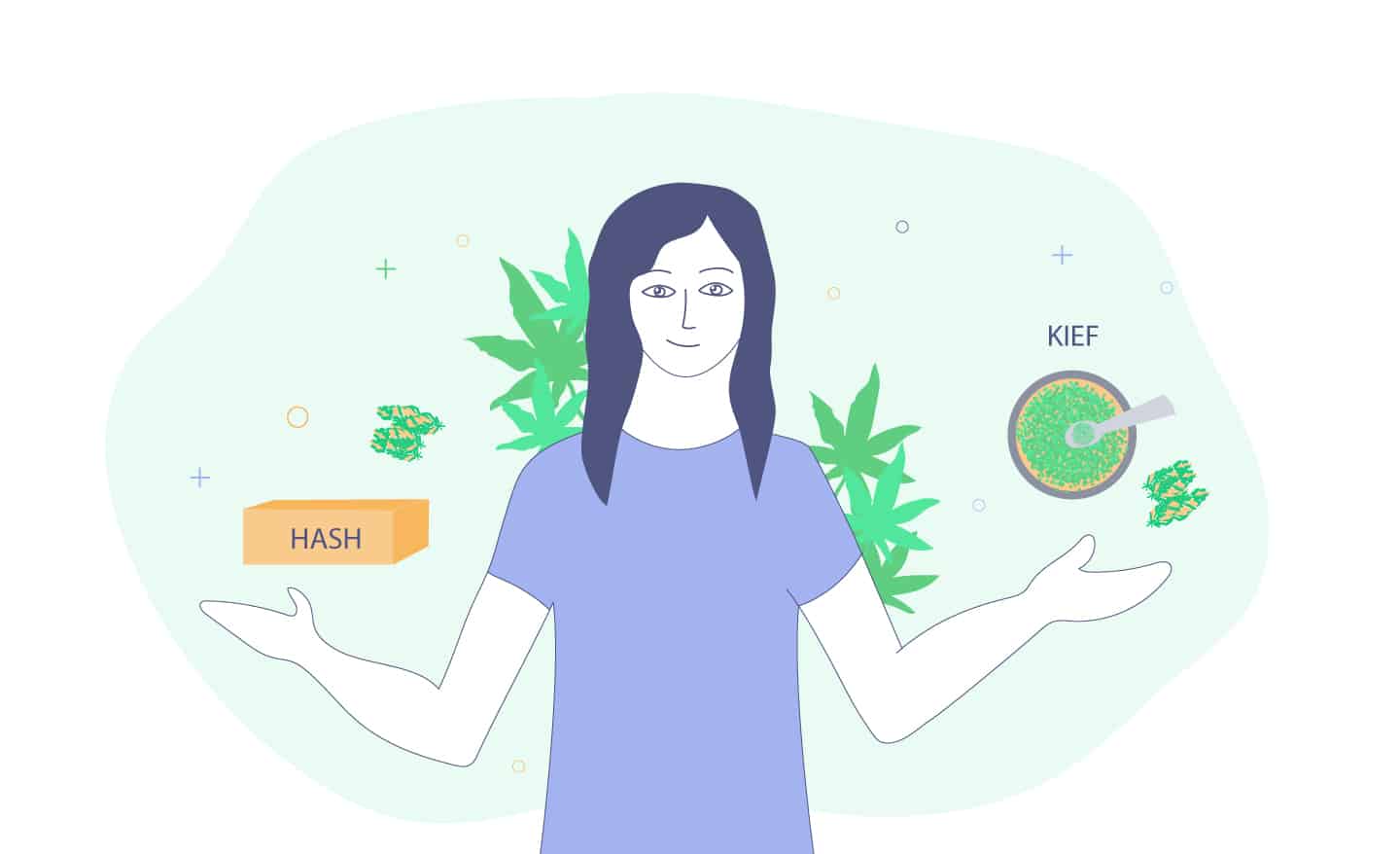 The Differences Between Hash vs Kief

Kief and hash come from the same part of the cannabis plant, but they have different uses and different THC concentrations. Learn more.